I admit the second half of this Wolves season has been a major disappointment. The team didn’t come together. Ronnie and Chase came back but they didn’t have the impact I imagined. Ronnie has played great when he is healthy and Chase even showed promise before his latest injury. Injuries to Nikola Pekovic and Kevin Martin played a big role in the teams in ability to mount a comeback.

But for the most part, the team just wasn’t good enough, consistently enough, to make it happen in the uber competitive Western Conference. It’s too bad really that this couldn’t have been the result of the Wolves season year ago. Think what may have been had Kevin Love not gotten hurt last year. Or even the year before, if Ricky had not gotten hurt. Of course we will never know, but what I’m trying to say … is this was still a pretty great year for the Minnesota Timberwolves franchise.

It’s kind of difficult to stomach and even more difficult to justify my homerism, when I think about just how good this season is compared to so many other Twolves seasons. The Twolves have a pretty good chance and ending the year .500. While this was not the goal, it’s still a marked improvement upon the last eight years since K.G. left the T.Cs. for the B.Cs. (Kevin Garnett … Twin Cities … Boston Celtics … just making sure you can translate my rhyming abbreviations), and the years before he was drafted in ’95. 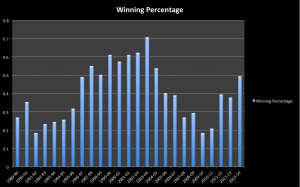 It’s actually shocking looking at this. This seasons winning percentage regardless of the result of the final game of the season in remarkably better than any season without Kevin Garnett. 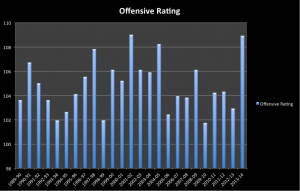 Boom! This Wolves offense really compares favorably to any team in franchise history. They flat out scored the ball this year. 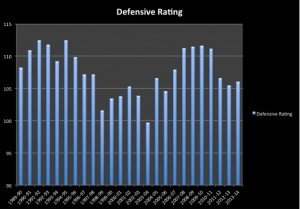 Even while so much blame was put on defensive lapses, the team still didn’t fare all that badly compared to … again … any year without Kevin Garnett. 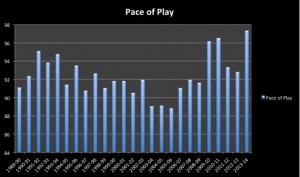 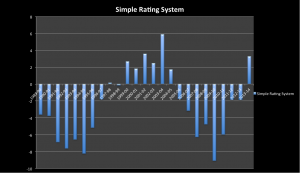 The Simple Rating System compares point differential to strength of schedule. This graph tells a story doesn’t it. The Twolves came out of this year with a positive point differential greater than three, playing in the talent packed Western Conference. Crazy. Crazy they did it and crazy they didn’t make the playoffs while doing it.

In all of it’s disappointment this was not really a bad season at all. We are disappointed that the team couldn’t mount a push into the playoffs. We are disappointed that the team could not win more games to keep Kevin Love interested in staying up in the deep northland. I mentioned the injuries, but how about the inconsistency. This was perfectly evident in the most recent game against Golden State. They drop forty-two points in the first quarter and then twenty-two in the second. I mean how does that happen. I’ll tell you why. The offense is streaky. The defense gambles. The starters lack defensive skills and the bench lacks scoring skills. Can’t their be some rotations that work? Theoretically there should be but this streaky-O and gambling-D style is just begging to fall apart.

This year we saw some life in the Wolves. We watched an offense that could catch fire at any moment … except the fourth quarter it seems. But nonetheless it was fun to watch. Ricky, Kevin and Pek Continued to dazzle on that side of the floor. Added to that mix came the fascinating connection on the break of K- Love’s outlet passing and Corey Brewers leak-out-one-man-fastbreaks. Not to mention his recent fifty-one point outburst. We also saw Kevin Martin have some of the most prolific scoring nights of any shooting guard in team history. We’ve also watched the emergence of rookie Gourgi Dieng, of late. He’s played fantastically and projects to be a solid contributor for the Twolves for years to come.

I hate it that I’m talking about balancing a roster again, but this time the Twolves are not laking talent or positional balance, but balance of style. Cohesiveness, and like Mike Reynolds continued to mention all season on twitter, this is not an issue of them needing more time. Finally the wolves have some players that are really good. And sometimes they played great together. They played great when things went well and struggled mightily when things got rough.

A further blame-dropping article may be in the works, but it’s just hard finally seeing a Wovles team that should be competitive on paper drop the ball. Somethings have got to get done this offseason  and the team needs to fix some glaring problems. And they’ve have to do it with limited cap space. I hate even thinking this but it seems like the Wolves will be tearing this thing apart in a couple of years if a changes are not made. Thankfully we didn’t fall completely out of luck, as would have happened if we would have finished ninth in the conference, where we would have lost out on the playoffs and had to send our first round pick to Phoenix. But, especially if Adelman comes back, the Mid Level exceptions will have to be used with exceptional care. And the team has to try to find a way make some moves and trade for pieces that might help bring some cohesiveness to the on court product.

Somehow, I want to watch a team that plays with the cohesiveness down the stretch like we just saw from Golden State. Even the most fun and best Wolves games of this season seemed totally crazy, like the blowout of the Lakers or Corey’s fifty-one point freak out. I can’t really think of too many games where the wolves walked out of the gym really having taken care of business. I mean that in the way Golden State closed the door on the Wolves just now. They just closed it out. They weren’t dominating or even playing all that well, they just did enough to win and it didn’t really feel like there was any doubt they were going to come away with their fiftieth win.

Anyway, Wolves fans find our selves looking forward again. Stuck in the mud. So close but so far away from the playoffs. It’s like this team gave us an appetizer of what playoff basketball feels like, with Gorgui’s game winner on the “Chaos” Brewer’s wild night, and before that the win over the Heat. Just wetting our appetite. Hopefully there’s a main course coming soon.

Essentially, this teams got one more year to build around this core. If they can’t do it then I fear it’s back to the drawing board. But look at the graphs. Everything is starting to trend in the right direction and with all of the deficiencies that his style seems to have these days, Adelman has turned this team around. See how many Rambis winning percentage columns it takes to add up to this year. It’s still not a bad time to be a Wolves fan … at least considering where we have been.