There’s something particularly special about pro sports when you’re a kid. The players are all older than you and you get to look up to them and dream about being like them someday. Then somewhere along the way you get to be in your early 30’s like I am, and suddenly these people that you looked up to are significantly younger than you are and you realize that if your dream of becoming an NBA player had come true, you’d likely be retired. It definitely takes some of the fun of the fan experience when you don’t have that hero to idolize. And so while I’ll still get behind Kevin Love, Ricky Rubio, and whoever the next generation of Timberwolves superstars are, I can say with fairly good confidence that no team will ever mean more to me than the 2003-04 Minnesota Timberwolves. That team had my favorite player of all-time, Kevin Garnett, at his absolute apex. It was also the only Wolves team in my 25 years of fandom that ever managed to win a playoff series.

With that in mind, you can imagine my delight when I rode up the escalator in my hotel two days ago, turned my head, and saw Mark “Mad Dog” Madsen staring back at me. Here was one of my “heroes”.

Approaching celebrities is always tricky business. The opportunity doesn’t happen very often for most people and so it’s hard to know what to do or say when the situation arises. Personally, I always take the approach of keeping things as “real” as possible, remembering that while I may be excited to meet this person, the reality is that the celebrity has no idea who I am and most likely has very little interest in speaking with a complete stranger. The key is to be polite, semi-apologetic for bothering them, and to get in and out as quickly as possible.

With that in mind, I went up to Mark, introduced myself as a long-time TWolves fan, said that I couldn’t let the opportunity pass by to shake hands with a member of the legendary 2003-04 team, and asked for a quick photo-op which you can see above. I figured that would be that, and we’d go our separate ways. I’d have my minute brush with NBA celebrity and a cool story to share with College Wolf.

However, what happened next is not surprising if you followed Mark Madsen at all through his NBA career. Being the incredibly nice guy that he is, Mark continued the conversation and engaged me and my friends for a bit longer. We talked about our respective reasons for being in Chicago (he for the NBA Draft Combine, myself for a Pediatric Oncology conference), and the conversation made its way around to TWolves Blog, Bloguin, the old “Mad Dog Blog”, being a doctor, and other NBA topics. Throughout the past few days, we’ve bumped into each other a few times and chatted for a bit.

Perhaps the most interesting tidbit I’ve gotten from Mark during this time is my newfound insight into the secret underworld of large pants. Apparently, when NBA teams come to town, there is sometimes a “pants guy” who will show up to the hotel. This is like Christmas for the NBA players who understandably have a difficult time finding clothes that will fit them. This pants guy will buy a hotel room and invite the players up. The room will be full of NBA-sized pants and the players will stock up with 4-5 pairs at a time for like $100 a pair. Hopefully I didn’t just spill some well-kept NBA secrets or get the “pants guy” in trouble by publicizing his semi-black-market operation, but I felt this was a rare glimpse into the NBA lifestyle that few people know about.

When you grow up rooting for a team and idolizing its players, there’s always a part of you in the back of your mind that knows this important “relationship” in your life is extremely one-sided. The team and the players care approximately 0.00000001% about you compared to how much you care about them. While I would have jumped at the chance to meet and hang out with any of those players, there was always a fear in the back of my mind that I would find out they were secretly huge jerks. Thankfully, in my two life-time encounters with Timberwolves, I’ve hit the jackpot. Kevin Garnett was extremely nice to me when I met him back in 2003. He even gave me some props about the video I made for the team during the playoffs that year. And now, a decade later, Mark Madsen has managed to go above and beyond what you could ever expect from meeting one of your favorite players. He’s been so great that I’ll even give him a pass for not remembering the classic 2004 playoff video (of course 10 years later, why would he?)

Maybe this will refresh your memory, Mark…

All in all, meeting Mark was a great experience and one that I felt was worth sharing with the TWolves Blog faithful. Sometimes, we are rooting for more than just laundry and the players we look up to are genuinely good guys. My only regret in all of this is that I never got up the courage to ask him to dance… 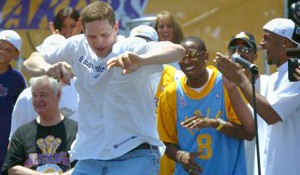 Now that would have been pure gold.