Game two for the Wolves occurs in a comfortable setting at Target Center, and hopefully the stands will be packed and the energy level high.

Last night was a toughie but a goodie. The highlight was easily the 2nd half bench stint which featured some outstanding minutes from Shabazz Muhammad, Gorgui Dieng, Anthony Bennett and Mo Williams. It was a sight unseen for Wolves fans, a game where the bench controlled the momentum of the contest, if only for a short while. A few additional takeaways from this game are something that will likely irk Wolves fans for the next several weeks/months and that is the need for instant gratification with the young players. I absolutely fall into this camp and admit to being mildly annoyed with Wiggins sitting for most of the second half even if it is irrational and short sighted. For example, Flip can rightfully be questioned for removing Gorgui Dieng, who was having a tremendous impact in his 2nd half stint, for Pekovic, who looked out of shape and was completely destroyed by Marc Gasol, and was an unquestionable minus in the game. This was a costly decision for a few reasons that surely had a negative impact on the final four minutes, which resulted in an ironic four point loss (remember the stat from last year?) against the best defense in the West.

I will be curious to see how Flip manages the minutes for the home debut. The paying public, after all, has been led to believe that the young players who pepper this roster will be featured prominently throughout this season. Perhaps it was a road game against a Western Conference mainstay with an elite defense that gave Flip pause about playing the youngsters down the stretch. Either way, it will be a recurring theme in trying to keep the veterans happy with minutes while also providing valuable developmental time for the future. While it was certainly only a single game and the first one to boot, I wonder how fans will view this team in mid-January when Kevin Martin is averaging 15 shots per game to Wiggins’ 6-8. While one option gives you a far better chance of winning a game today, the other (featuring Wiggins more prominently) has a much greater payoff down the line. Last night we saw smatterings of both, with Flip directing the offense towards Wiggins in his few 2nd half minutes with consecutive possessions attacking the best perimeter defender in basketball in Tony Allen. While those plays calls likely weren’t sound for winning basketball and attacking weaknesses, they were still a pop quiz of sorts for Wiggins, and he did convert inside on one of the possessions.

The mid-range Flip offense was in full force last night as the team attempted just 11 3’s (I’m not counting the Rubio full court heave) and 32 mid range shots. The weakness remains finishing inside and Pekovic was not a plus against Marc Gasol in that area. If Daryl Morey were to look at this shot chart, his long term health would slightly weaken: 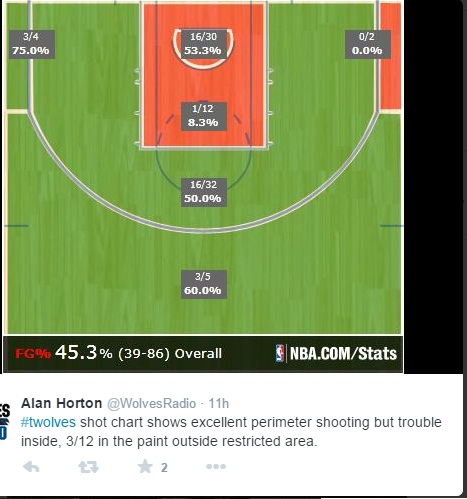 Onward. The Pistons are a team in a similar transitional period to the Wolves. Both lost on the road last night in their season opener. More retroactively, both teams spent significant money in 2013 free agency, failed, and now have a new coach and a new direction with many key pieces and untradeable salaries intact. The new coach in Detroit, Stan Van Gundy, has a smattering of younger players himself that show promise in the frontcourt, and must also balance a crowded rotation of vets and youth.

The key 1-on-1 matchup tonight will be between Pekovic/Dieng and promising 3rd year center Andrew Drummond who struggled last night vs. Denver, fouling out in just 27 minutes. Pekovic struggled mightily against the Grizzlies last night and either will have a bounceback game tonight vs. the Pistons, or will continue his typical early-season struggles which have become an annual tradition of sorts.

Another thing to keep an eye on will be the ongoing rotation. Last night raised many questions and a few concerns, but the addition of Kevin Martin will complicate matters for both shot distribution and minutes played for young guards. While it is far too early to lose more than 5-10 minutes of sleep per night over, there are already signs of this team needing a trade to clean up the rotation, as many expected. Hopefully Flip can continue to balance the youth + vets recipe appropriately while also building up much needed trade value for the contracts on the roster. Given both Budinger and Brewer have two years remaining on their contracts, at least one of the two should not have a long term future in Minnesota.

One last general comment. It is very early in the season. Injuries, rotation changes, and obvious success and failures will occur. People get that. But that should not result in in-the-moment intrigue and discussion being labeled as a panic overreaction. It is okay to discuss nuances of games, rotation decisions, and to continue to project successes and failures of players on this roster even if they are based on single, early games. That is part of what makes babbling about the regular season so interesting, enjoyable and engaging. So please don’t be the #wellactually guy who feels the need to tell people to relax who are into these nuances. Thank you.