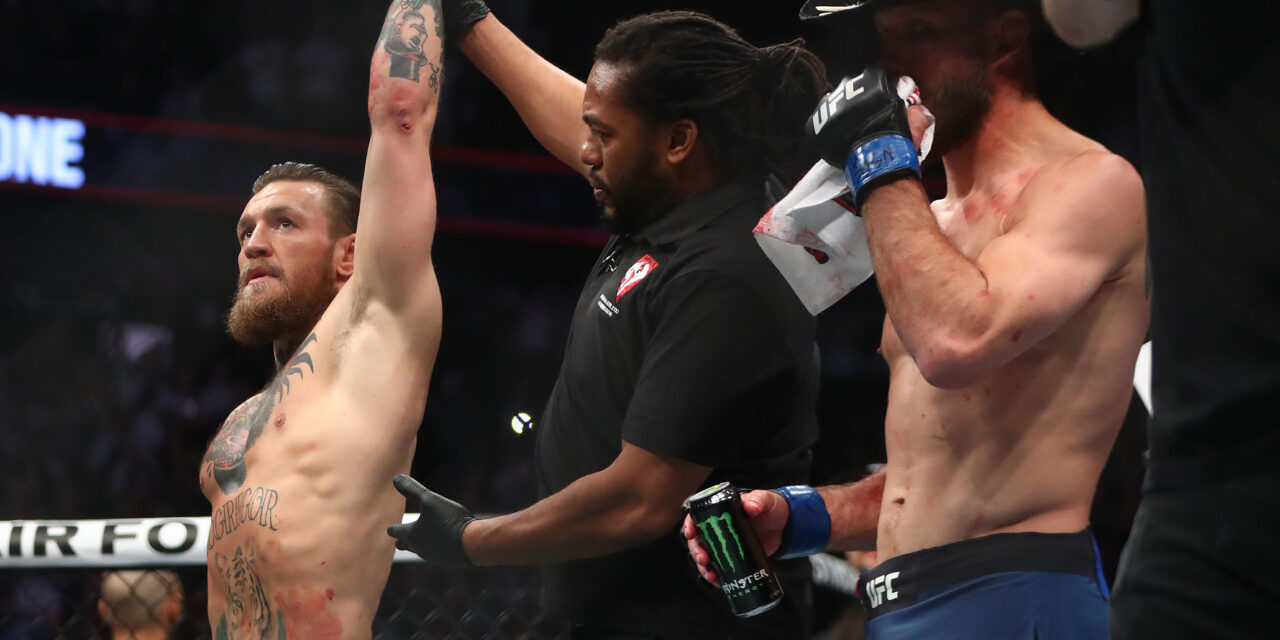 Las Vegas is the nucleus for the world’s sporting events and hosts numerous events for the masses to flock to and watch. With NFL and NHL gaining some serious traction in Sin City, sport has only become transparently more prevalent in the desert city. Let’s look back at some of the biggest and unique best-selling Pay-Per-View events that Las Vegas has hosted.

With the impact Covid-19 has had on sport, the world of sport has come to a halt, with the exception of UFC 249 next week. Let’s look back at some of the biggest and unique best-selling Pay-Per-View events that Las Vegas has hosted.

Holyfield came into the fight as a 25-1 underdog but looked as competent as Tyson on the opening bell. The fight was breathtaking, with both fighters coming out of their corners throwing a flurry of punches, it was anything but a conventional heavyweight bout. The 11th round arrived and Holyfield found another gear as he rained a 12-punch onslaught on a dazed and hurt Tyson to secure a third heavyweight title.

UFC 100 was upon us and with it came the 100th pay-per-view event in the company’s history and was considered to be the UFC fight of the year. Lesnar only had a handful of fights in his locker but his second fight with Frank Mir in 2009 at the Mandalay Bay Events Center was perhaps his finest performance.

Lesnar started strong by taking Mir down and peppering him with a flurry of strikes, but an illegal blow caused the referee to restart the action, presenting the chance for Mir to grab a hold of Lesnar’s leg and dispatch his inexperienced foe by first-round submission.

This was the fight that McGregor managed to avenge his 2016 loss to rival Diaz. The Notorious managed to knock down and claim a fifth-round decision victory in a jam-packed T-Mobile Arena.

The first affair ended in McGregor losing via submission in the second-round and the Dubliner had a point to prove in their second bout. UFC 202 was the first event under new ownership of WME-IMG, who had just spent $4billion buying the company from Zuffa.

June 28, 1997, at an overflowing MGM Grand Garden Arena in Las Vegas, Tyson would attempt to avenge his shock loss the year before. Tyson bit part of Evander Holyfield’s ear off, and to this day the fight will be known as the ‘The Bite Fight’.

The attack led to Tyson’s disqualification from the fight and a suspension from boxing, and it seemed the strangest chapter yet in the champion’s roller-coaster career.

The Mexican fighter was one of the rising stars in boxing and was considered the boxer to thwart Floyd Mayweather’s plans. Mayweather was the veteran with everything to prove. This fight had the makings of the passing of the torch.

Instead, the fight played out in classic Mayweather style, handing yet another fantastic 12-round decision win to the American. Canelo would have to wait another day to topple the ever-impressive Mayweather.

The MGM Grand Arena was the center-piece for this epic showdown in Las Vegas. De La Hoya was the aggressor throughout the bout and managed to break Mayweather’s defenses in the early rounds as Money Mayweather moved away and countered without great effect.

In the fifth round, however, the fight seemed to shift into Mayweather’s favor as he stood his ground and traded in the middle of the canvas with the former champion. Mayweather’s trainer assured the young Floyd that Oscar was tiring and he would fade later into the fight. The judges awarded the fight to Mayweather in a closely scored fight.

UFC 229 delivered on the bad blood between its golden boy Conor McGregor and the undefeated Khabib Nurmagomedov. Another night under the lights of the T-Mobile Arena, the main event was sure to attract some big crowds.

The fight was filled to the brim with drama and hatred, with both fighters making it no secret for their distaste to one another. Nurmagomedov dominated the Irishman in the octagon and even incited a riot cage side post-fight that spilled into both camps in the crowd. The fight attracted a huge number of eyes and saw McGregor lose by submission to hated rival Khabib.

The T-Mobile Arena found itself hosting one of the biggest events in sports history, Mayweather vs McGregor. The fight was clearly a monumental publicity stunt, but the numbers came flooding in with pay-per-view buys.

The build-up to Floyd Mayweather and Conor McGregor’s landmark bout featured a four-city tour. The fight promotion was unconventional and controversial but made the globe’s head turn nonetheless. The fight, on the other hand, was stale and lacked excitement with Mayweather forcing a tenth-round stoppage to remain undefeated.

Coined as the ‘Fight of the Century’ it had the masses flocking to purchase the fight. The fight was six years in the making and, judging by the fight, it was six years too late.

The MGM Grand Garden was the location and Las Vegas was the city. Manny Pacquiao was denied a chance to apply his swarming fighting style as Mayweather applied his expert defensive game. Another 12-round win for the undefeated American.